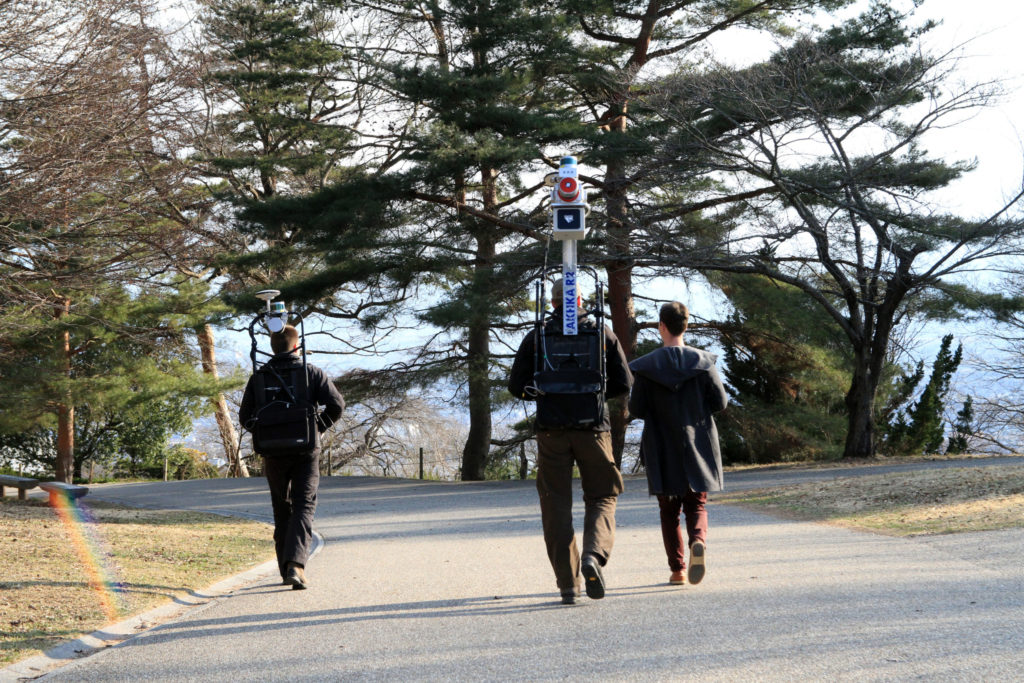 Laser scanning scientists at work in the field. Picture: Juha Hyyppä The scientific achievements of the Centre of Excellence in Laser Scanning Research (CoE-LaSR) have produced plenty of benefits with far reaching impact both commercially and societally. The CoE-LaSR developed innovations particularly for forestry and the built environment. The CoE-LaSR was led by the Finnish Geospatial Research Institute (FGI) from 2014 to 2019. Other members of the CoE-LaSR were Aalto University, the University of Helsinki, and the University of Oulu. Funded by the Academy of Finland Centres of Excellence programme, the CoE-LaSR educated 30 new professors for 12 universities or research institutes, 24 doctors and 24 masters in various fields. One of them is Joanne White who graduated as Doctor of Science during her time at the CoE-LaSR. Her scientific achievements have made her one the most highly-cited researchers of the last decade. White’s achievements include promoting the use of laser scanning in forest inventories. The CoE-LaSR published over 400 scientific publications, many of which are significant in their field, highly cited or have attracted numerous reads. Some of them are award-winning articles published in world-class publications. In their 10 year’s review, the Remote Sensing Journal assessed the publications from the FGI and the University of Helsinki in their journal as having the highest quality, which is an excellent sign of the CoE-LaSR’s success. This means that the articles have been cited the most. The articles written by groups of CoE-LaSR researchers surpassed articles produced by top-class universities, and internationally famous research institutes and organisations, such as NASA and the National Oceanic and Atmospheric Administration (NOAA).

The CoE-LaSR also brought advances in technology, for example, new electronics for laser scanning, new laser scanning methods and systems, and new developments of the backpack laser scanner for mobile surveying. The CoE-LaSR researchers also developed and tested mini-UAV laser scanning methods based on autonomic operation. The CoE-LaSR also participated in the advancement of precision forestry, and virtualising and modelling built environment. In addition, the CoE-LaSR provided training to future laser scanning experts in the field of forestry at the Shinshu University in Japan. ‘The new research and surveying methods and the more accurate forestry data have a significant financial impact. For example, in Finland where we have a lot of forests, the savings brought by the new precision forestry technology can be up to several hundred million euros. The CoE-LaSR has significantly progressed the forest industry’s Efficient Wood Supply 2025 vision that aims to increase the efficiency of the wood value chain by 30%’, says Juha Hyyppä from FGI, who was the Principal Investigator of the CoE-LaSR. The CoE-LaSR has promoted the openness of research and research data exceptionally well. The MeMo research group, a cooperation between FGI and the Aalto University, was awarded the first ever national open science award in 2019. MeMo was led by professor Hannu Hyyppä from Aalto University. According to a study by the Ministry of Education and Culture, FGI is the most advanced research institution in Finland when it comes to open science.

Bringing science and the business world together

The results produced by the CoE-LaSR also included several publications in the fields of trade and business. The project’s results have had significant and direct commercial and societal impacts: ten spin-off companies were born out of the CoE-LaSR that now employ almost one hundred people. ‘The societal and scientific impacts of the CoE-LaSR are far reaching and will be present in the years or even decades to come. Even with the most revolutionary advances in technology and science, it often takes years or even decades before the full impact to the society and the scientific development can be seen, says Juha Hyyppä.

Combining science and art – the result surprised with its popularity

The scientific, economic and societal achievements of the CoE-LaSR are in a class of their own. The project also yielded some unexpected results in the world of art with a doctoral thesis from the University of Helsinki. That thesis was turned into a music video. The esteemed Science Magazine annually organises a Dance your Ph.D. contest that awards the videos that best manage to explain scientific results in creative ways. The winner of the Physics category this year was a music video submitted by Samuli Junttila, Idän Proffa – Keilaa puita feat. Linda Ilves(link is external), where Junttila, PhD in forest sciences, explains his climate-change-related research by rapping about it. Junttila is the first Finnish winner of the contest. Plenty of other cooperation in art and culture was conducted during the CoE-LaSR’s years of operation. The MeMo research group, a cooperation between Aalto University and FGI, created 3D models of the traditional cross-country skiing routes in Lahti for Yle’s sports department, produced the first ever virtual radio play with Svenska Yle for the Helsinki Festival, enriched plays and theatre performances with augmented reality and participated in the Kutitus children’s art festival multiple times. Aalto university has also made a 3D model of the Espoo Cultural Centre to facilitate building art installations, and modelled several other cultural locations.